The Cannabis Plant is extremely complex. Its rich profile counts more than 550 components, and at least 140 of these are cannabinoids.

Besides cannabinoids, we can find terpenes and flavonoids that play an important part in the all-over benefits of this plant. You might have heard about the entourage effect before, which is basically the result of the teamwork of the plant compounds. It is believed when you utilize all the chemical compounds together, they support each other and greatly enhance the therapeutic effect of the Cannabis Plant.

Cannabinoids or phytocannabinoids are compounds of the Cannabis Sativa plant and it is believed they carry plenty of medicinal properties. They might be a useful treatment for anxiety, pain, nausea, and inflammation. Cannabinoids can bind to our bodies’ endocannabinoid receptors (CB1, CB2) and helping our Endocannabinoid System (ESC) maintaining homeostasis in our body.

Terpenes are aromatic oils that determine the smell of many plants and herbs. Terpenes are what give the distinctive scent of lavender, lemon or chamomile and lots of others. Terpenes are also found in the cannabis plants and besides giving them their aromatic flavor, they are also believed to have a big role in the effect of the different strains. Some terpenes can promote stress-relief and relaxation, others might help with focus and acuity.

Flavonoids are a diverse group of phytonutrients (plant chemicals), and they can be found in almost all veggies, fruits, and also in the Cannabis Sativa plant. They have rich antioxidant properties and can help boost your body’s immune system. Besides terpenes, flavonoids also give special characteristics to the different strains. They not just affect their unique scent but also play part in their pigmentation. 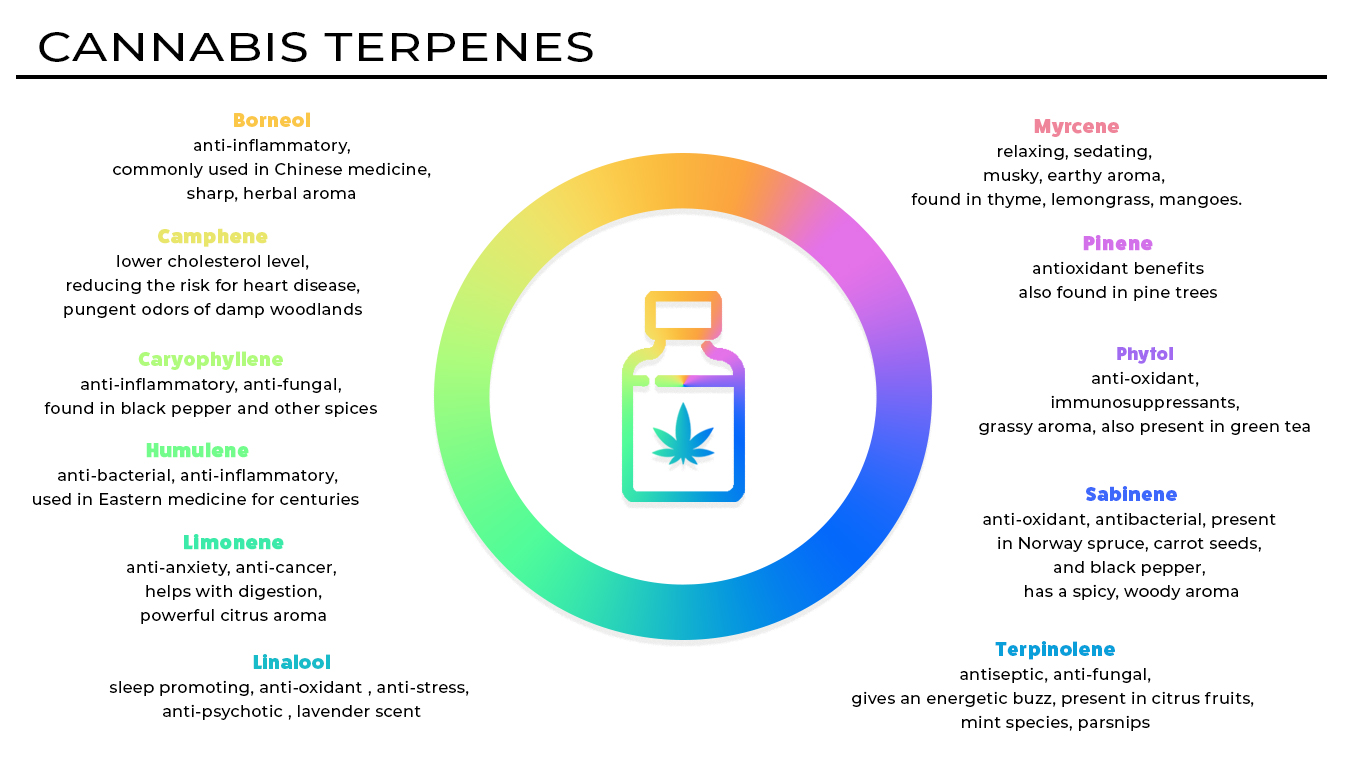 The main cannabinoids and their roles

Cannabinoid compounds mainly can be found in the plant’s flower buds. The two main cannabinoids that are the most popular and best-studied are delta-9-tetrahydrocannabinol (THC), cannabidiol (CBD).

The cannabis plant in its fresh uncured form doesn’t necessarily contain CBD or THC. Instead, we can find these phytocannabinoids in their acidic form. Cannabinoid acids need to be activated to turn into cannabinoids. We call this process decarboxylated and it basically means that by using heat, light, or long-term storage the cannabinoid acids can turn into THC, CBD, and other cannabinoids.

Just like THC and CBD, THCA and CBDA are the most abundant cannabinoid acids in the strain. The other compounds are in the plant at a much lower level, but still important building blocks of the whole.

It is also interesting, that if you would consume the uncured, unheated cannabis plant it wouldn’t get you high. Precursors don’t have a mind-altering effect on the body. THCA is harmless and even has great health benefits. The trick here is, that as soon as you expose the plant to heat THC starts to form and that’s when you can end up getting intoxicated.

The other plant cannabinoids

After the process of decarboxylation cannabinoid acids will lose their “A” part and turn into neutral plant cannabinoids. Let’s see what are these compounds and what kind of effect they have on the body.

CBD (cannabidiol): It is a non-psychoactive compound, that can ease the effect of THC. Researches show that it can have many medical benefits. It has antipsychotic characteristics, it can help with pain relief, also has anti-inflammatory properties, and can help with mood improvement.

CBG (Cannabigerol): It is a cannabinoid, that doesn’t have mind-altering effects, and formed early in the growing cycle of the plant. Higher CBG strains can minimize the effect of THC. It may help with depression and works as a sleep aid. It is also believed that the benefit of CBG includes anti-inflammatory, antifungal, and antibiotic properties.

CBC (Cannabichromene): CBC is a non-psychoactive compound that may treat inflammation, depression, it might have anti-tumor effects, and it encourages the growth of new brain cells.

THC (delta-9-tetrahydrocannabinol): It is found in high concentrations in most marijuana strains. It’s famous from psychoactive properties. May causes the feeling of euphoria, relaxation, it may stimulate your appetite, improves a sense of well-being. It is also antispasmodic and antioxidant.

CBGV (cannabigerivarin): This compound is often referred to as “the mother of all cannabinoids”, since it a molecular precursor of major cannabinoids. It does not have an intoxicating effect on the body, but it might help with pain, inflammation, and dry skin. Just like in the case of other cannabinoids, more research is needed.

CBCV (cannabichromevarin): typically exists in cannabis strains at lower levels than THC and CBD and has a similar structure to CBC. Unfortunately, more research needed to fully unfold the benefits of this cannabinoid, but because of the similarity to CBD scientist believes it might offer the same values.

THCV (tetrahydrocannabivarin): It is similar to THC in molecular structure and psychoactive properties, but THCV offers its unique effects and medical benefits. THCV is an appetite suppressant, it may help with diabetes and Alzheimer’s, and bone-related conditions. A study also conducted that THCV decreased body fat and increased energy in obese mice.

CBDV (cannabidivarin) This compound is structurally similar to CBD. Just like CBD, CBDV is not intoxicating when isolated, so it won’t cause the euphoric high, that THC can provide. Research has shown, that high CBD strains can also contain a higher dosage of CBDV and less THC. More studies are required on CBDV, however, it appears that might be able to help with Rett syndrome-related seizures.

CBN (cannabinol): CBN has a mild psychoactive effect since it forms from THC when the bud is exposed to air. If you want to keep your medical marijuana high potency you can keep it in a tight, sealed container. CBD is known for its capability to help with insomnia, appetite stimulation, and immune system regulation.

There is no doubt, that the Cannabis sativa plant can be an important one in our life and can offer many benefits in treating different health conditions. However clinical studies take time so we need to be patient because it might take a while until we get to know everything about the amazing properties that the plant has to offer.